Enigmatic birds that fascinate every photographer

Owls are attractive and inspiring photography subjects with their gestures and facial expressions. And Finland certainly is the place to photograph them – in a good year, there can be up to 10 different Owl species breeding!

Within Finnature’s range, vast Taiga forests, meadows and fields are home to eight species of northern Owls: Eagle Owl is the largest, Great Grey Owl the most special, Hawk Owl the most nomadic, Ural Owl the most secretive, Boreal Owl the most common yet rarely seen, Pygmy Owl the fiercest despite its tiny size, and Short-eared and Long-eared Owls similar in habits. Snowy Owls, as handsome as they are, are extremely rare winter visitors and even rarer breeders in Finland, and Tawny Owl is more southern species and does not breed in Oulu or Kuusamo areas.

Amazing variety as it is, ways to photograph different Owls vary largely. The most important factor that affects photography opportunities is the food situation in nature. Voles and other small rodents are the main prey for Owls, and vole populations vary both between years and geographically. For example, pure vole specialists such as Great Grey Owl and Hawk Owl, will not breed unless there is enough food in the area. Rather, they might migrate to another area after food.

We at Finnature are specialized in finding Owls and have the best knowledge on where and when to photograph them. During winter months (Feb-April), we can often find Owls hunting in open fields during daytime, and they can be extremely photogenic. May and June are the best months to photograph breeding Owls in Oulu and Kuusamo areas – if they are breeding.

See photos of northern Owls at our Flickr gallery for Owls of Finland.

Owl densities are very sensitive to food situation in nature. Their main prey are voles whose populations fluctuate in cycles between years and locations. Before inviting photographers, we always search for the best Owl photography opportunities and make sure that Owls are photographable, considering both their individual behavior as well as the setting and environment for photography.

Despite their large size, Great Grey Owls are not easy to find. Even though Great Grey Owls are almost as big as Eagle Owls, they are really only balls of feathers and have a good coloration to blend into their northern environment. They are very light in weight and can fly silently through the air.

Great Grey Owls are pure vole specialists – they breed only when there is a sufficient supply of voles in the area. This means that their breeding differs between years and locations. We at Finnature have built numerous artificial stick nests for Great Grey Owls and help them to find breeding sites in Finland’s harvested forests in this way. We check old nests and look for new territories every year in early May, and we know about the breeding situation of that year only after this.

In some winters, Great Grey Owls can be found hunting in open areas during daytime. This usually means that they struggle to find enough food, either because of shortage of voles, or because the snow cover has frozen so hard that it is difficult for them to strike through it. Those winters Great Grey Owls can be extremely photographable.

Finnature announces Great Grey Owl photography opportunities only on short notice. Winter Owls can be usually photographed during February to April, while May and June are the best months to photograph breeding Owls. In some years, we can offer hide photography at Great Grey Owl nest sites. 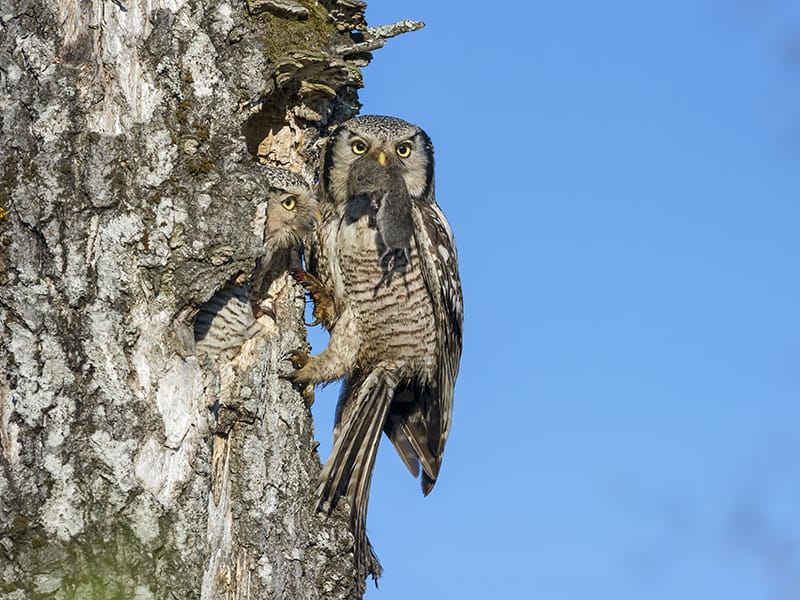 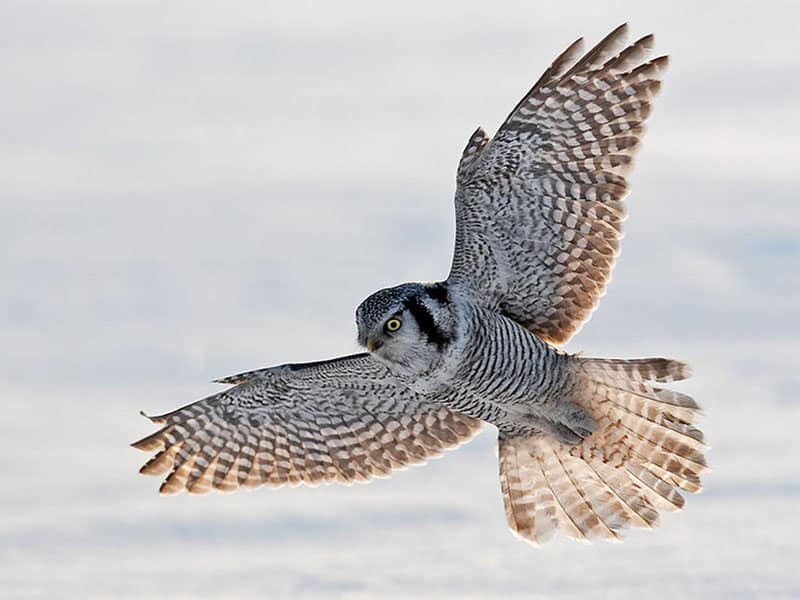 Northern Hawk Owls are true nomads of the north – they wander after their prey through wide areas across their circumpolar range in the north. Like Great Grey Owls, Hawk Owls are also pure vole specialists and breed only with enough of voles in the surroundings. Hawk Owls are hawk-like both in appearance and in behavior: they often hunt by day and have long tail and pointy wings. Also, they like to perch a top of prominent trees scanning for their prey. This makes them easier to find than many other Owls. 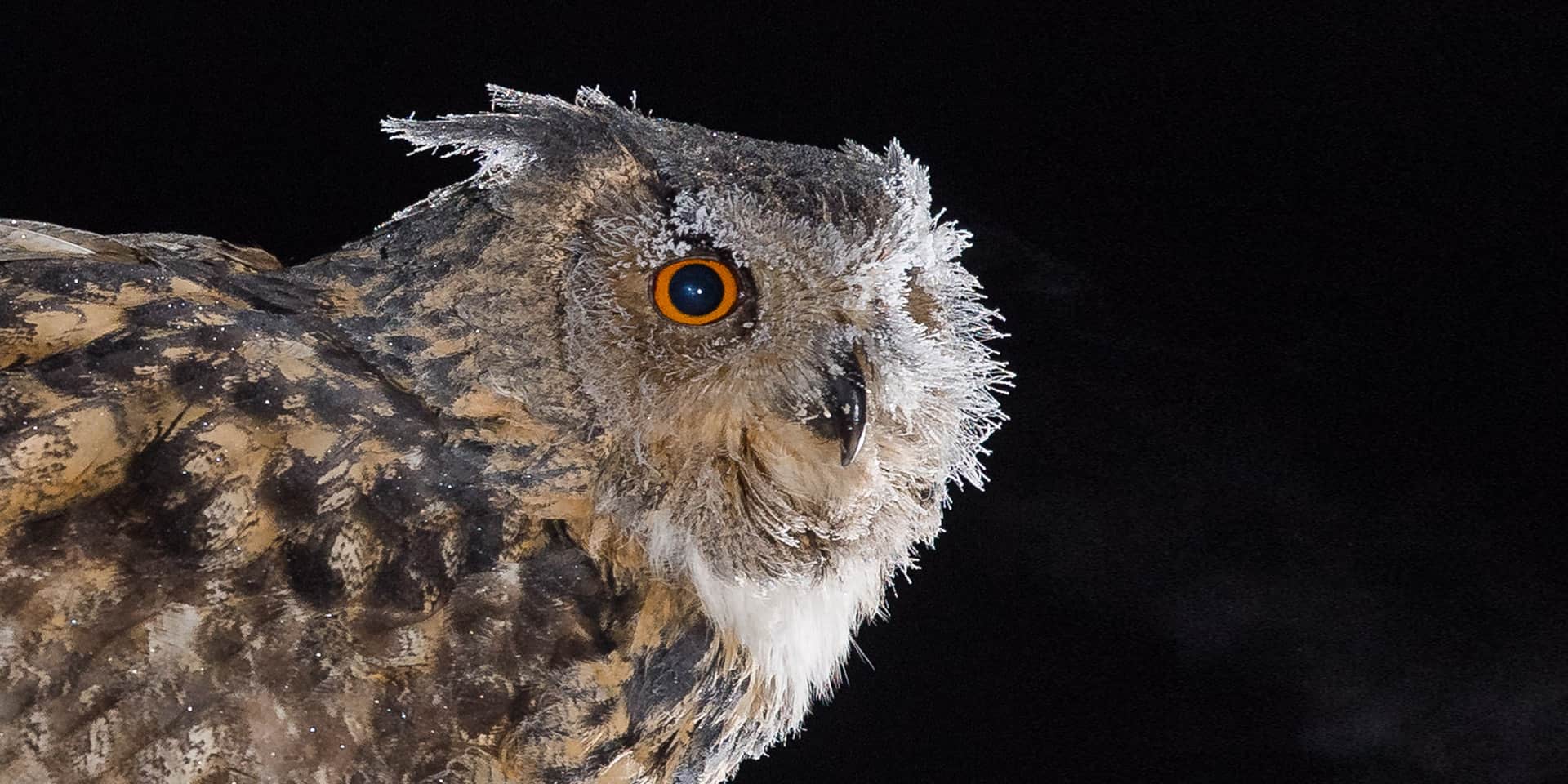 Eurasian Eagle Owl is the biggest Owl of Europe. It is a powerful bird and characterized by its large size, prominent ear tufts and large orange eyes. Like all Owls, Eagle Owl’s eyes are set forward which greatly enhances depth perception but doesn’t allow the Owls to rotate their eyes at all. Owls therefore have particularly flexible necks and can rotate their heads 270 degrees either way!

Eagle Owls have been regular visitors at Finnature’s forest feeder near Oulu since 2015. A resident pair visits the feeder almost every night during August to June when we keep the feeder going. We have set up a led lights to photograph Eagle Owls during the night. 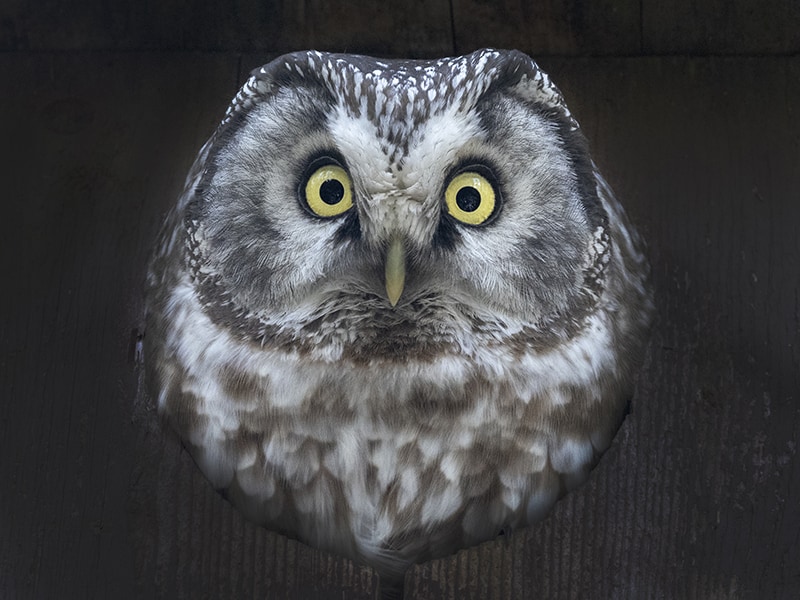 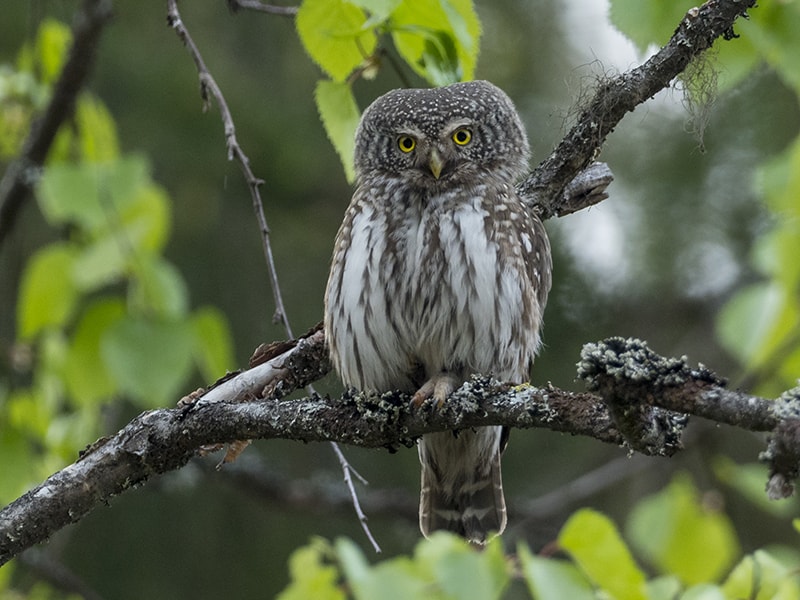 Boreal Owl, or Tengmalm’s Owl, is the most common Owl in Finland. Yet, they are almost the rarest to be seen. This is a result of Boreal Owls’ purely nocturnal habits and the fact that they live in dense forests. These mysterious Owls are very vocal during the hooting season in February-April. To listen their calls in a silent winter night is a striking experience.

Best chances for Boreal Owl photography are in the breeding season in May and June. Finnature sets up nest boxes for Boreal Owls to breed and they accept them readily – and we are glad to help our winged friends in this way.

The Northern Pygmy Owl may be tiny but it is a ferocious hunter and has an appetite for passerines. They are usually active by day and songbirds often gather to mob a Pygmy Owl discovered in daylight.

These small Owls are resident in Finland and stay in their territories all year round. Best photography opportunities arise, however, during the hooting and breeding season in April – June, when the Owls respond to calls nicely. 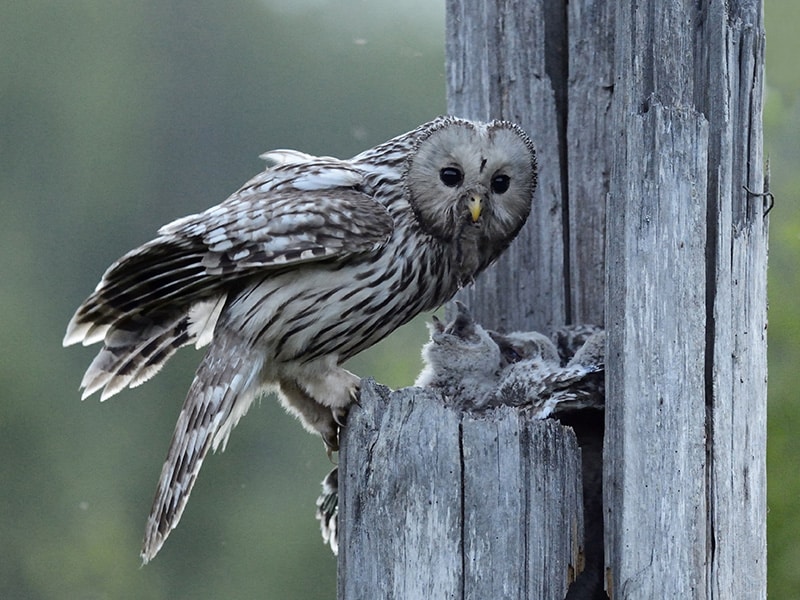 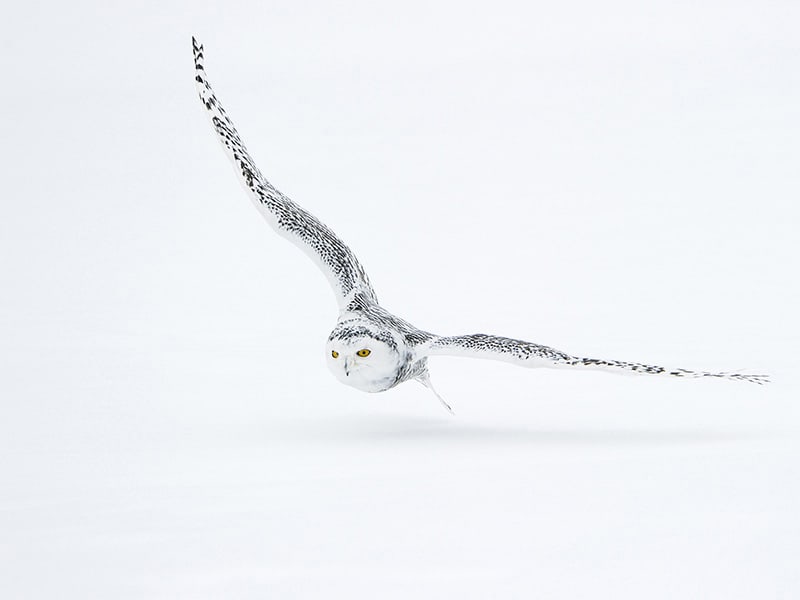 Ural Owl is a large secretive Owl occupying the forests of Finland and other parts of Eurasia. Ural Owl is mainly active during night – luckily our summer nights in Finland are filled with light. These Owls are not as dependent on voles as Great Grey Owls and Hawk Owls. Instead, they prey on a variety of mammals, birds, frogs and even insects.

The ghostlike Snowy Owl is the rarest Owl in Finland. They are unmistakable in their appearance. Certainly, all white male is a photographers’ dream. These large and powerful Owls breed only in the Arctic tundra and are dependent on their main prey, Lemmings. In turn, Lemming numbers fluctuate largely, and therefore Snowy Owls will remain an elusive photography dream for many. 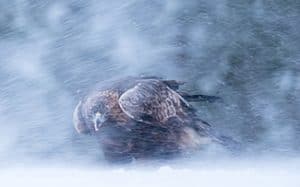 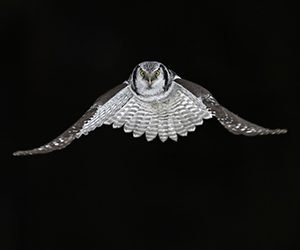 Finland is home to 10 enigmatic Owls that fascinate every photographer 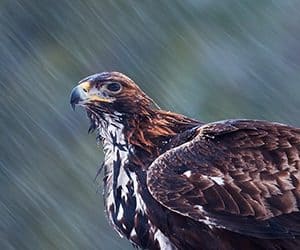 Photograph the most powerful of birds from Finnature's hides 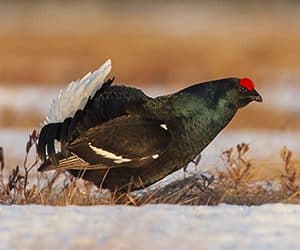 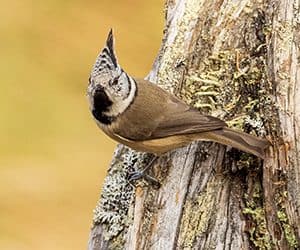 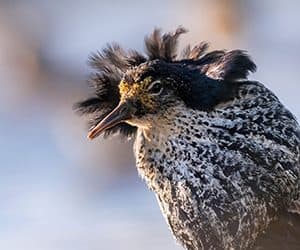 Some of the most interesting photography takes place in Finland's wetlands

This website uses cookies to improve your experience while you navigate through the website. Out of these cookies, the cookies that are categorized as necessary are stored on your browser as they are essential for the working of basic functionalities of the website. We also use third-party cookies that help us analyze and understand how you use this website. These cookies will be stored in your browser only with your consent. You also have the option to opt-out of these cookies. But opting out of some of these cookies may have an effect on your browsing experience.
Necessary Always Enabled
Necessary cookies are absolutely essential for the website to function properly. This category only includes cookies that ensures basic functionalities and security features of the website. These cookies do not store any personal information.
Non-necessary
Any cookies that may not be particularly necessary for the website to function and is used specifically to collect user personal data via analytics, ads, other embedded contents are termed as non-necessary cookies. It is mandatory to procure user consent prior to running these cookies on your website.
SAVE & ACCEPT